Rugged Devices in Action: A Day in the Life of a Field Scientist

Home | Sonim Blog | Rugged Devices in Action: A Day in the Life of a Field Scientist

We talk a lot about the use of rugged devices in public safety, construction, logistics and industrial settings. One use case that’s pretty obvious but not often discussed is field science work. Dr. Mike Simpson, ecology consultant and communicator at Earth-Rooted Ecology Projects, reached out to help shine a light on this essential industry and how field and research scientists can benefit from the use of rugged technology in data collection outside of the lab.

“When my colleagues first switched from paper-based data collection to mobile devices, it seemed like everyone was using iPad Minis. I think that was due to Apple’s dominating reputation in the consumer tablet market at the time,” said Dr. Simpson. “Things have changed now, though, because more manufacturers are producing good quality Android tablets and companies like Sonim have shown there is a market for rugged Android tablets that Apple is not exploiting.”

Collecting data in the field comes with its own set of challenges as Mother Nature and technology can clash at the worst times. Dr. Simpson found himself in a situation last summer while on a project in remote northern British Columbia where his device failed and he had to keep working.

“I arrived at a site to collect data on a hot day. When I went into my pack to retrieve my iPad Mini, I discovered the screen was cracked rendering it useless,” he recalled. “My colleague had an iPad, but it didn’t have cellular capability. I had to record GPS coordinates with a handheld device, which was not ideal. As a result, I had to resort to writing data in a notebook. That adds a lot of extra work and increases the risk for errors. I have been in other situations where devices became too hot in the sun and switched themselves off, or the battery died. Equipment failures like these can be devastating to the project.”

Losing a consumer device in the field can also be catastrophic. Although this is more of a human than a technology failure, it highlights another reason why rugged devices are a good idea. If you can’t recover a lost device until the next day, you want to be confident it will survive a few hours in the wild if the temperature drops or it rains.

According to Dr. Simpson, rugged Android devices are always going to be a safer bet in the field than a device designed for the consumer market. Rugged devices must meet specific performance standards for being dustproof, waterproof and drop-proof. Also, unlike most rugged tablets and phones, iPads and iPhones aren’t designed to be used with gloves, which are often a required piece of personal protective equipment in the field.

GPS-receiving capability is vital. When in the field, scientists rely on GPS to navigate into, out of, and around study sites as well as recording the locations of surveys or geographic features in the area. The GPS receiver must be accurate as important sites might be revisited a year or more later by a different scientist and there may be no other way to identify the location where something was found originally. Precise location data is even more important in an emergency scenario. Scientists need to be able to send their exact location to a helicopter pilot or emergency responder, especially if the team is in a remote forest and can’t be seen from the air.

“Most iPads must be cellular-capable to be able to connect to GPS satellites without using an external GPS unit. Scientists need to be able to register their location via GPS in the field for safety reasons and to collect spatial data for projects,” said Dr. Simpson. “Up to now, this feature costs extra on an Apple device. Wi-Fi-only Android tablets have GPS receivers built-in. Having a rugged Android tablet with LTE or 5G capability to upload data provides the best of both worlds.”

No Need for Cutting Edge, Just the Basics Will Do

Scientists can easily get by without cutting edge specs. The device can’t be too slow as fieldwork is often done under tight deadlines. Having a tablet with cellular capability can be required if the client expects real-time updates from the field.

Scientists require other basic features in the field:

If you found this blog to be helpful, keep an eye out in the coming weeks for a review of the RT80 by Dr. Simpson. We look forward to hearing about how it stood up to the elements in the Great Northwest. After all, winter is coming.

What Kind of Scientists Rely on Rugged Devices?

Scientists with different specialties do fieldwork for many different reasons. Biologists, ecologists, geologists and archaeologists, for example, all have to collect data in the field on programs that can range from small scale local developments, through mid-scale infrastructure projects such a highway expansion, up to large scale natural resource facility construction projects. Field scientists also work on commercial jobs including marine, freshwater and land-based contamination, remediation and reclamation projects. On the academic side, research scientists can have extensive, multi-year field programs. In fact, Dr. Simpson was required to complete five years of field work as part of his PhD program.

Whether scientists are in the field for academic or professional purposes, they will all benefit from knowing their devices can withstand whatever the field throws at them. “If you are clambering through a forest over fallen trees and rocks, collecting aquatics data in a river or lake, or digging pits looking for artifacts, you need a device that isn’t going to fail if you drop it on the ground or in the water,” Dr. Simpson added. “You also need to know you can keep using it if the weather conditions make a change for the worst. Most importantly, though, you want it to be working if you need to call for help.”

Sonim’s XP3 is Hard at Work and Play

Dr. Simpson uses his XP3 and has no fear about taking it anywhere. “I can see that Sonim’s engineers have paid attention to what people need in a rugged device, from the design, through the specifications, right down to the materials they have used. I like its size and rubberized body because these features make it easy to hold and not easy to drop. I also value its loud speaker when I’m working in noisy environments, such as near highways or a helicopter. Having the ability to program SOS information in using SonimWare is welcome, too, because one day that might be a lifesaver.” Check out his recent review of the XP3plus here. 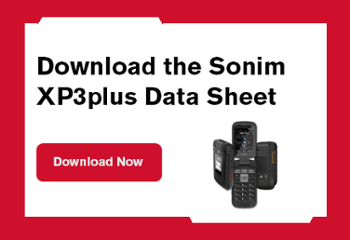