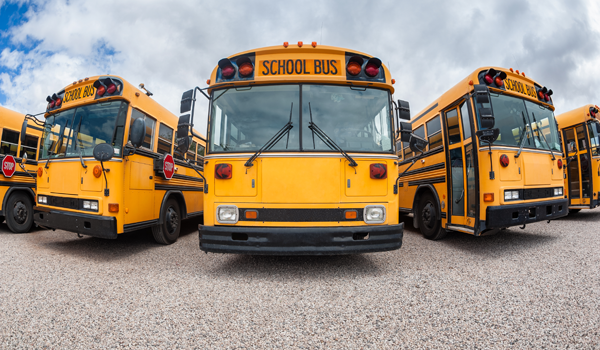 The FCS Transportation Department prides itself on safely transporting students to their destination on time and ready to learn. Communications has played a key role in this effort. The district has been investing in communications solutions for more than 20 years while staying compliant with state requirements and ahead of the curve by adopting innovative mobile technology along the way.

According to Vickie Cross, executive director, transportation for Fulton County Schools, “It was imperative to have a handsfree, rugged solution with PTT capabilities inside each bus. We also wanted bus drivers and monitors to be able to punch in and out while on the bus. You can’t get this functionality from a radio or a feature phone.”

One of the key elements was giving the district access to the FirstNet network. “Given these requirements, we didn’t have a lot of options to choose from,” said Djamal Balbed, system analyst, Fulton County Schools. “Our decision was easy as there were not a lot of devices to choose from that met all of our needs and are FirstNet-ready.”

On a Mission to Deploy “The Right Stuff”

To accommodate these needs, FCS provided bus drivers with access to the FirstNet network through AT&T to be able to connect and communicate with dispatch and the FCS transportation department anytime, anywhere. School buses are approved as Extended Primary users for FirstNet which means they have access to the FirstNet Band 14 Network. In the case of an emergency or natural disaster, the local Primary FirstNet users such as the local Sheriff’s office can up lift Fulton County School busses to priority status on the FirstNet Network to assist in the event and communicate directly with First Responders.

FCS also upgraded the entire fleet from feature phones to Sonim XP8 smartphones. The Sonim XP8 Android smartphone, one of the first devices to be compatible with FirstNet, provides instant communication and ultra-rugged features that can withstand harsh work environments.

The XP8 also helped tame the time keeping process for FCS by hosting the UKG Dimensions time keeping application. Now drivers would be able to electronically track their time directly from the phone immediately before and after their shift.

AT&T also enlisted GPS Lockbox to provide the PTT mounts and remote speaker microphone making the XP8 handsfree for drivers who must avoid distractions while staying connected to dispatch at all times. The State of Georgia has strict handsfree requirements and needed a modular configuration inside each bus. The GPSLockbox system allows the flexibility to mount each component anywhere in the front of the bus and ensure the driver’s viewing area is never impeded. In this case, the XP8 rests in the PTT mount to the left of the driver and the amplified speaker is above the driver’s head.

The GPS Lockbox system conveniently locks and unlocks the XP8. The mounting system’s built-in amplifier and speaker allows for cleaner communications than a cell phone, and the attached palm microphone is ergonomically similar to a traditional driver’s mic. The kit’s NAC-approved power system can cut the amp/speaker through a noise kill switch to comply with state regulations. This configuration also enables the driver to easily control volume without taking his eyes off the road or hands off the wheel.

“The PTT mount only mount in the industry that is optimized for PTT and also includes a 20-watt amplifier and speaker,” said Jack Dovey, GPS Lockbox co-founder. “That’s critical on buses where the volume of the engine combined with the students can become very noisy.”

Using FirstNet’s Enhanced Push-to-Talk and the XP8, bus drivers can easily interface with dispatch without bulky radios and remain focused on the safety of students. This instant communication is essential to the district’s delivery program, but it’s primary purpose for the district is to enhance student safety. This includes communicating bus delays, student location and emergencies to parents.

The district is also able to seamlessly manage the fleet of devices through Sonim’s comprehensive set of software tools, applications and utilities called SonimWare designed to improve the management and productivity of the FCS mobile ecosystem. Device provisioning and deployment enables IT administrators to rapidly customize and deploy updates and new devices as the fleet expands.

Deployment: The Devil is in the Details

Installing a communications system into each bus was not plug and play. According to Balbed, “It’s not just about what happens with the decision making where you get a phone and go use it. It’s what happens with the implementation so the devices can do what you need them to after they have been installed throughout the fleet.”

AT&T and Sonim developed a comprehensive, phased plan to transition out the old feature phones and transition in the new FirstNet-ready XP8 smartphones. “You’re not going to find many people in the district who can do this. Sonim seamlessly provided that level of service and did exactly what they said they would do,” said Balbed.

At the launch of the deployment plan, Sonim and AT&T began with testing the XP8 smartphones and the configurations that were designed to give the bus drivers everything they needed at the touch of a button. A “benchmark” device was sent to Balbed who determined what features would be needed at a moment’s notice. “We had to get it right the first time,” said Trey Stow, director of transportation – operations, Fulton County Schools. “No one wants to start over or have to make one-by-one adjustments in a fleet nearly one thousand buses.”

Once the benchmark device passed the testing phase, Kelly Christian, Sonim’s deployment expert, developed a checklist of every feature that needed to be customized on each phone. More than 25 detailed steps were required in provisioning the devices including unboxing, installing batteries, updating software, configuring the Wifi and Bluetooth features, downloading applications, configuring the home screen display and volume settings, activating PTT and contacts, and more.

“To make the most of every minute we had, Google updates were conducted at night to take advantage of increased bandwidth. This is just one example of how we tried to increase efficiencies during the implementation phase,” said Christian.

Once configured, the devices were shipped in phases to FCS in Atlanta. In an attempt to avoid shipping delays due to the pandemic, the configured devices were sent in batches allowing the district to easily transition out the old devices, train the drivers and avoid delivery delays.

“Nine hundred and thirty phones were installed throughout the fleet in three weeks,” said Balbed. “There was no down time as a result of the transition. AT&T, Sonim and GPS Lockbox made sure it was an efficient process.”

FCS’s commitment to leveraging mission critical communications is paying off. Bus drivers have a complete mobile communications solution that leverages one-touch PTT, the lifeline to dispatch. The handsfree solution keeps drivers’ attention on the road while allowing them to easily connect to dispatch when necessary. FCS is now FirstNet-ready. In the case of an emergency, communications throughout the fleet can be elevated in priority on the FirstNet network so they can stay informed.

The district continues to eliminate mountains of administrative paperwork and potential errors by moving the time keeping process to the UKG Dimensions application on the XP8. Today, Fulton County bus drivers can focus on getting kids where they needed to be safely, which is what matters most.

“This end-to-end solution is checking all the boxes and will allow us to expand when we’re ready,” added Cross. “As for now, we are putting it to the test and it’s passing with flying colors.”