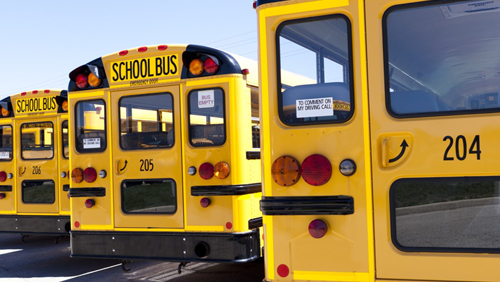 Located near both the Baltimore and Washington, D.C. metropolitan areas, the Carroll County Maryland school system is the 10th largest school system in the state. Despite its proximity to major cities, the school system is considered to be in a rural area but is quickly becoming suburban.

With the responsibility of moving more than 24,000 students each day in Maryland, safe and reliable communication is of paramount concern to transportation officials at Carroll County Public Schools. This year, despite COVID-19, the district’s transportation department began a major initiative to upgrade its communications system – which previously relied on drivers using traditional consumer cell phones.

“The system we were using previously was just not effective – in the case of an emergency, a driver would need to pull over to answer a cell call,” said Anita Stubenrauch, supervisor of operational performance at Carroll County Public Schools. “It delayed emergency management and weather response, and really presented a problem if we needed to locate a child. The lack of real-time vehicle location and driver communications really frustrated our operations.”

Carroll Country’s 311 contractor-operated buses constituted a network of drivers and cell phones, but without any interconnectivity, built-in device safety features, or real-time tracking capabilities. Communication and GPS were critical elements of the district’s transportation departmental improvement plan for years – and approved by the school board-appointed security council. Stubenrauch and transportation department staff spent a lot of time researching and testing various solutions.

“We conducted a pretty exhaustive search and testing process for technology which would solve our GPS and communication issues, allowing us to safely provide more effective transportation for our students,” said Michael Hardesty director of transportation for Carroll County Public Schools.

The Sonim XP5s, for onboard use, were installed on mounting kits provided by GPSLockbox. The GPSLockbox system secures the Sonim device, allowing for convenient locking and unlocking and handsfree operation. The mounting system’s built-in amplifier and speaker allows for cleaner communications than a cell phone, and the attached palm microphone is ergonomically very similar to a traditional driver’s mic.

“It is the industry’s only mounting hardware optimized for Push-to-Talk which also includes a 20-watt amplifier and speaker; and individual volume control so that a driver can easily increase or reduce the device’s volume without taking their eyes off the road, searching for the side buttons on a phone,’ said Dan Starr, GPSLockbox vice president of sales and marketing.

Stubenrauch said that the powerful speaker system is critical for pupil transportation due to the noisy onboard environment. From an operational perspective, she said that the entire mounting system is a massive upgrade for the district’s emergency management processes.

“Many times, drivers cannot even hear a regular cell phone ringing because of onboard noise,” she said. “Whereas we previously needed drivers to pull over to answer a phone call, they have a microphone within reach and can use it while remaining in compliance with Maryland law.”

If drivers encounter an emergency while driving, they can pick up the microphone and automatically and simultaneously connect to the district’s transportation office and their contractor employer. The PTT capabilities of the Sonim XP5s allows for one-to-one and one-to many communications, which is critical for dispatchers who must quickly communicate directives during emergency situations. 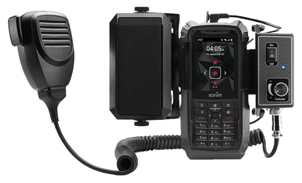 “It operates very much like traditional school bus radio microphone, but it works on the FirstNet nationwide cellular system as opposed to a traditional local radio tower,” Starr added. FirstNet, built with AT&T, is a communications platform dedicated to public safety – purpose-built for first responders and safety-driven industries like pupil transportation.

“The FirstNet public safety broadband network ensures that Carroll County Public Schools officials can reliably and clearly communicate to the district’s network of contracted drivers – with priority and pre-emption if the commercial network becomes congested,” aid Brandon Gallion, associate director, product marketing, FirstNet Program at AT&T. “Where is the bus? Can you communicate with the driver? These are critical questions during an emergency and a priority network helps ensure student safety.”

The district has yet to encounter a fleet-wide emergency since installing the system but has successfully tested the group-wide dispatch system. Stubenrauch said that emergency preparedness is top-of-mind after a tornado tore through the area in Spring of 2019 and officials were unable to communicate with a bus.

“The system has created such an improvement in our office,” she added. “It’s almost as if the overall stress level has dropped – because we know we can get in touch with a bus, and that driver will respond to us.”

“We are still learning the system,” Hardesty said. “But I believe that we will be ready to roll when the system a fully operational. I feel much more comfortable knowing where all of our buses are and knowing we can each them instantly in an emergency,” he added.

“From an operational standpoint, we are very pleased about the district today compared to five years ago – and at all the hard work it took to get here.”

This article was originally posted by School Bus Ride Magazine and can be read here.